Water is the solvent of life. It’s no coincidence that most of our planet is covered with it.

If you’ve never heard of ionized water before today then it may sound too good to be true. But we assure you that it has a long history with a proven track record. The discovery of how to make ionized water did not happen overnight.

It all started back in the 1800s when English chemist Michael Faraday discovered the law of electrolysis. The Russians then used Faraday’s discovery to invent the first electrolysis machines in the early 1900s.

Japanese scientists then went on to investigate Russian electrolysis technology, and found that electricity could be used to restructure water; thereby recreating what happens in nature when water runs over rocks–alkaline pH water with a low ORP (oxidation reduction potential).

Their studies found jaw-dropping links between ionized water and resistance to disease, increased muscle development, increased mental alertness. Their findings were amazing – but puzzling. How can ionized water produce so many life-enhancing benefits?

The secret these Japanese scientists discovered has been called ‘micro-clustering.’ It’s simple: ionized water actually has smaller molecule clusters than the water that comes out of your tap.

When you pour a glass of water from the tap or water cooler, the water molecules are clustered together in big groups – usually 10-13 molecules per drop.

But in micro-clustered ionized alkaline water, the clusters are made up of only 5 or 6 molecules. This breakthrough discovery from Japanese scientists is the secret behind the incredibly potent hydrating power of ionized water – and the life-changing health benefits it unlocks.

Water ionizers first appeared in Japanese hospitals and were approved for home use in the 1950s. More than 30 million people have used a water ionizer since then, and they can be found in one out of every five Japanese homes today.

To ionize means to gain or lose an electron. Direct current flows from (-) pole to (+) pole. Electron current (e-) is opposite to current (I), so the movement of electrons flows from (+) pole to (-) pole.
(See diagram below). 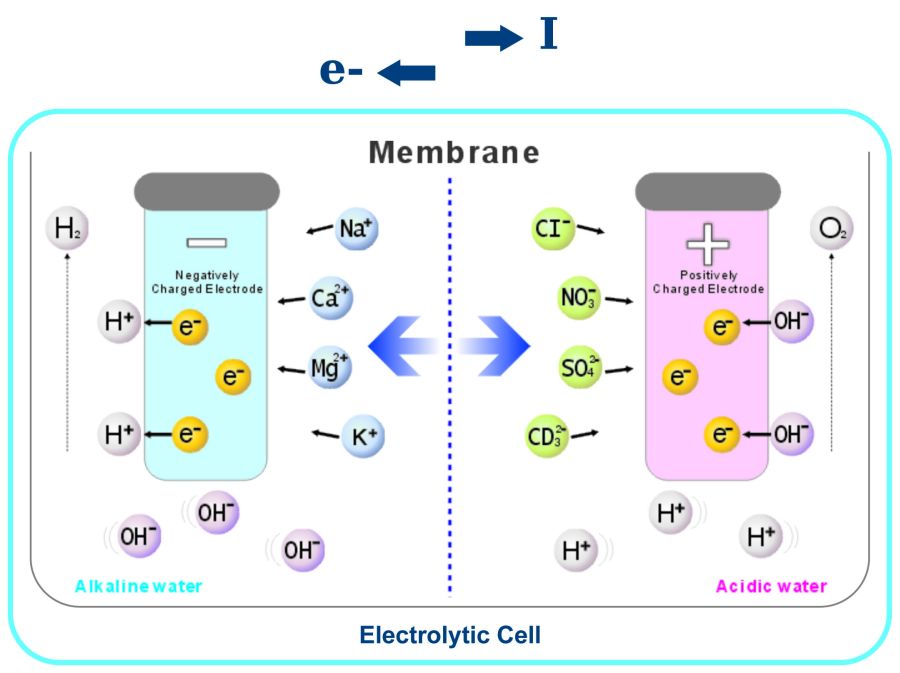 Enjoy water as nature intended it. With all the dangers lurking in tap and bottled water and the massive benefits of ionized water all just a few clicks away, can you afford to keep living without it?

Join Our Email List and Receive Exclusive Special Offers on all Chanson Products offered nowhere else anywhere, including access to special offers on Water Filters and Ionizers.

You have Successfully Subscribed!